I was thrilled when Alisa Harris over at Cooking Up Comics asked if I would like to contribute a guest recipe to her blog. The recipe went up early this morning and now I can finally share it with you!

Alisa’s blog is an all vegetarian (often vegan) recipe comic blog and she has been posting comics of her own for some time now. They are always fun recipes and I encourage you to check out the rest of them.

I loved creating this recipe comic and I hope to do more of them in the future. Illustrating food is something I really enjoy so for any of you out there that have a food project you need illustrated, let me know!

Maybe it’s cheating, but today’s comic is only one panel. It’s actually an idea I’ve had for inclusion in another project and I decided to take the sketch and experiment with it for 30 Days of Comics.

I’m fortunate enough to have a husband who loves cooking and is also fabulous at it.

I’m starting to catch up on my 30 Days of Comics, though I’m still a day behind. I’m doing a lot of experimenting with these, as you’ll see in the second one. The first one is about my childhood when we would drive several hours to the nearest shopping mall and, if I was lucky, my parents let me buy a magazine and it was usually MAD or Cracked.

The comic below had a lot of experimentation within it. Also, I got a little frustrated with the paper I was using and gave up on doing the washes. To be fair, I’m not using proper paper at all for these.

This is the story of a cat I owned when I lived in LA. This thing had it out for human beings for sure. Every time I played with him it ended in blood and violence! Anyway, I’m saving my extra day for 30 Days of Comics for the weekend when I’ll have the time to catch up.

I’m still a day behind for 30 Days of Comics and this one has no ending. I haven’t figured out what would be the best way to end it, but when I do I’ll be sure to update this post! Thanks everyone for reading all these comics! And yes, this is me as a child. I was a brat.

Anyone who knew me when I worked at the Getty Museum in Los Angeles, CA knows that this is a completely true story. I sat down for lunch one day and witnessed this. I’m not going to describe it, but trust me when I say it’s exactly what you think.

Whew! A whirlwind weekend that ended with my 30 Days of Comics entries for days 4 & 5. The first comic is only the first half of one. After getting a better brush to ink with and getting used to the brush I knew I could never get this whole page finished in time and I really want to stick to the schedule. The second half will be up probably tomorrow or Tuesday.

I know, I know, my lettering is awful. I tried it with the brush first, but I either need much more practice or a smaller brush if I’m going to stick with it as a lettering tool. So I switched to a pen in the interest of time and readability. Also, I’ve been doing these in a Moleskine and it’s just not great with the ink. I get some bleeding now and then if it’s a spot on the page that I’ve done a lot of erasing on.

This comic was inspired by marathon day and features the comic debut of my brother-in-law, Erik and my almost-two-year-old niece, Ella.

At the end of the day my wrist and back were killing me, but I am so happy to be working with a brush and ink again. And I must say, I’m pretty pleased with the results so far!

How do you letter your comics?

Today’s comic was a bit of an experiment – and also the continuation of yesterday’s terrifying discovery. I decided to go back to inking with a brush for this one, which I haven’t done in years. It felt so good to be drawing with a brush and I missed the fluid, loose line it creates. Unfortunately, the brush I had, which looked small enough, wasn’t quite as small as it appeared. So I got a lot of chunky lines and couldn’t get the detail I wanted. And there’s always one little stray hair that screws up small details!

Anyway, onward and upward! I’ll be investing in some much smaller brushes and giving it a go.

Click here for all of my comics so far.

Here is my comic for Day 2 of 30 Days of Comics. This is a true, and to be continued, story of the first time I found a humongous roach in my apartment. It was before my husband and I were living together and I had no idea what to do to get rid of it. Not to mention I was a bit shaken given the state I was in when I discovered it. The “killing” part of the story will come later this month. 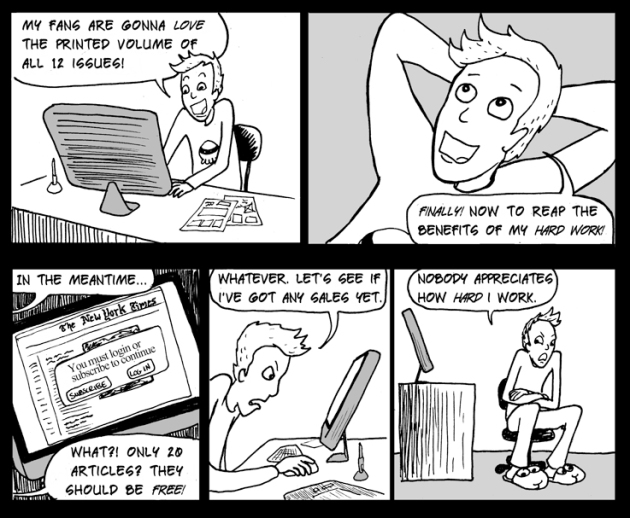 At the last minute I decided to participate in Derik A Badman’s (Madinkbeard) 30 Days of Comics. I’m hoping to use this time to experiment stylistically and maybe even get into using a brush now and then since I’ve got a big comics-related project in the works. This one’s a little rough and was done in about an hour since I had very little time today.